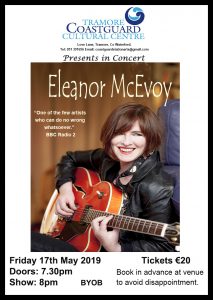 Eleanor McEvoy achieved star status in Ireland in 1992 when her song “A Woman’s Heart” was the title track for the A Woman’s Heart anthology album.  A Woman’s Heart has since gone on to become the best-selling album in Irish history.  She graduated from Trinity College Dublin with an honors degree in music and was accepted to the National Symphony Orchestra of Ireland as a violinist. She worked with the symphony for five years before she finally took the plunge and left the classical world behind to concentrate on her real passion—songwriting.  Eleanor released her eponymous debut on Geffen records followed by tours in the USA, Europe and the Far East. She moved to Columbia Records in New York for her second album ‘What’s Following Me?’ The first single ‘Precious Little’ was a top 10 radio hit in the US.

Since then, Eleanor has gone on to become an artist and performer known throughout the world. Her critically acclaimed canon of work spans fifteen albums and appearances on numerous compilation albums. She has also had numerous cover versions of her songs by performers such as Emmylou Harris, Mary Black, Phil Coulter, Mary Coughlan, Bella Hardy, (BBC folk singer of the year) Eliza Carthy, Derek Ryan and Jack L Her songs have been used in many TV and film sound tracks including HBO cult series “Six Feet Under.”, ABC’s “Clueless” and the Pearce Brosnan film “The Nephew”

Her 2016 album “NAKED MUSIC”, featured a collaboration with British painter Chris Gollon which was launched in Gallery Different, London, where “Naked Music – The Exhibition” ran for three weeks, featuring 25 Gollon paintings inspired by the songs on Naked Music. The “Naked Live…” tour that followed ran throughout 2016 & 2017 with shows in Ireland, England, Wales, Spain, Germany, Australia, USA and Scotland followed by the launch of “Naked Music – The Songbook” published by Hot Press.

Her new album “The Thomas Moore Project” was launched in Ireland’s National Concert Hall and features 21st century adaptations of the songs of the 18th/19th century Irish poet Thomas Moore.  It became RTE 1’s album of the week the week it was released and received rave reviews in Ireland, Hot Press magazine saying “McEvoy has re-established the relevance of one of Ireland’s most important yet most besmirched national artists” and the Irish Times describing it as “a highly evocative collection”

International acclaim followed with the Sydney Morning Herald writing “Still the world around you and listen to the words. Eleanor McEvoy, ever questing in her artistry, has crafted her own arrangements of songs by the distinguished Irish poet Thomas Moore…her voice distinctively blends the earnest with the elfin”.  She has since toured The Thomas Moore Project throughout England, Ireland, Scotland, Wales, Spain, Holland, Germany and Australia and will soon be bringing it to the USA where the album has been receiving extensive airplay.  When home from her travels, as well as being the chair of IMRO, Eleanor is also a voting member of the Recording Academy of America (the GRAMMYs) and in 2016 was appointed by Minister Heather Humphries to the board of Ireland’s National Concert Hall.