Ready for a unique and talented take on a wide range of musical traditions? Claude Bourbon is known throughout Europe and America for amazing guitar performances that take blues, Spanish, Middle Eastern, and Russian stylings into uncharted territories. Each year Bourbon plays more than 100 shows around the world. 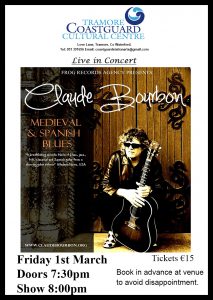 Born in France in the early 60’s, Claude Bourbon grew up in Switzerland, where he was classically trained for many years. This finger picking guitarist has performed and studied all over the world; He has played countless venues, including Glastonbury Festival, Isle of Wight Festival, Colne Great British & Blues Festival, Rock O’Z Arene, Avenches, Switzerland, among others. He has shared the stage in Europe and the USA with countless musicians, Calvin Russel, Charlie Morgan (Elton John, Gary Moore), Jan Akkerman (Focus), Steve Grossman (Miles Davis), Herbie Armstrong ( Van Morisson), Jose barrense Dias and many more.

Now based in the UK, some of this guitarists’ influences allow us a fascinating insight into this remarkable musician; Paco De Lucia: Deep Purple’s Richie Blackmore; Joaquin Rodrigo; JJ Cale; JS Bach….

One reviewer even noted that although “Claude’s roots were in blues, that is like saying Leonardo da Vinci was a painter”.  Intrigued ?

Experience an evening of exploration in the unique ambiance of the Thumb !

“ Claude Bourbon is a unique figure today… his playing is almost indescribable“ – The Hook, Charlottesville, USA

“Never heard anyone get that much beautiful sound out of a J-45”, Bob, Tucson, AZ