Freddie White has long been synonymous with music of the 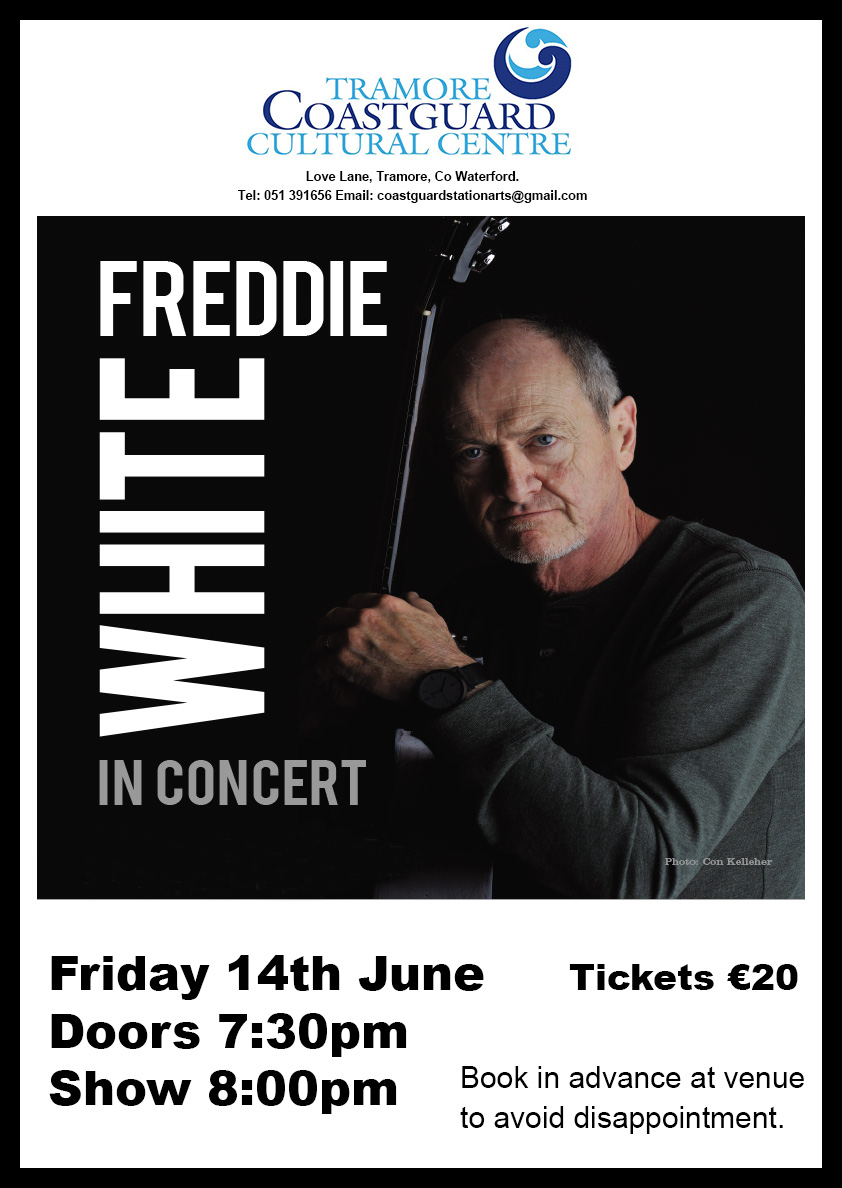 highest quality. Whether interpreting songs by his favourite writers, such as Randy Newman, Tom Waits, John Hiatt and Guy Clark, or performing his own classy compositions, Freddie’s live performances are nothing short of legendary. Freddie has been part of the fabric of the live music scene in Ireland since the 1970’s and his albums continue to sell well, amongst his loyal and new-found fan base.
Born in Cobh, County Cork into a musical family, by age thirteen Freddie was playing in school bands and by seventeen playing professionally. At nineteen, he moved to London, where he busked in subways, and developed his unique voice and guitar style.

In 1974, he was a founding member of ‘Scullion’, together with Philip King and Sonny Condell. Later he formed ‘The Fake’, regarded as one of the seminal Irish bands of the late ‘70’s. Next came The Freddie White Band formed in 1978, which toured with Eric Clapton that year.
His first album, Live on Tour, recorded by Nicky Ryan while touring with Clannad, brought him
national attention. His second album, Do You Do, was the biggest selling Mulligan Label album of
1981. With these early albums, Freddie introduced an eclectic repertoire of music, which spanned
musical genres and eras, to an Irish audience.
Long Distance Runner was launched in 1985, and it featured original songs such as ‘Goodbye This Time’, ‘Down Without A Fight’, and the hit single ‘Frozen Heart’, which was co-written with JohnnymDuhan. His fourth album, ‘Close To You’ continued this trend, with most of the songs self-penned.
In 1994, he released ‘Straight Up’, a collection of fourteen songs recorded live by DanDan
Fitzgerald.
‘My Country’ was released in Ireland in May 1999. A collection of eleven songs co-written with Ann O’Sullivan and based on the poetry of Don O’Sullivan. The album was co-produced by Freddie and Declan Sinnott, renowned for his work as producer and arranger with Sinead Lohan, Frances Black and Mary Black and as lead guitarist with Horslips and Moving Hearts.
In May 2002 the 2-CD set Lost and Found was released, comprising digitally re-mastered versions of two of Freddie’s best selling early albums, albums, namely, Live on Tour and Do You Do, under the watchful eye of original producer PJ Curtis. The re-release was warmly welcomed not only by the many whose original vinyl copies had long since worn out, but also by those who delighted in discovering these classic recordings.
In 2004, Freddie White returned to Ireland after many years living in the USA and released an all-
new studio album entitled Four Days in May. Recorded in Dublin with some of Ireland’s finest
musicians over a four-day period, it showcases Freddie’s songwriting prowess and unerring choiceof songs worthy of remarkable reinterpretation.

Since then he has toured regularly and also dedicated himself to the development of his latest
recording, collaborating with songwriters Jimmy MacCarthy and Jim Barrett. Released in 2008,
‘Stormy Lullaby’, is a stunning collection of moody tracks in which Freddie White’s musicianship
and voice shine through. He has once again teamed up with his old cohort DanDan Fitzgerald to
produce this gem. The album has an acoustic feel thanks to the input of a small, tight group of
musicians from his native Cork. Some tracks are newly written, while others (not previously recorded by Freddie) have proven their worth by becoming firm favourites with his live audiences. It showcases what Freddie does best – that is ‘get inside’ and deliver heartrending, troubled love songs in a manner guaranteed to stop you in your tracks. It is often said of Freddie that he does not merely ‘cover’ great songs; more often than not he improves on the originals. Indeed, if this were not the case, he would surely be more highly revered for his own songwriting accomplishments.

His keen ear for quality songs, undisputed talent for interpretation and exemplary songwriting
skills, stand out in his most intimate offering. Freddie’s album, Here With You released in April 2012 introduced Trish Hickey and is a collection of songs from some of their favourite writers.  The album was recorded in Ireland and Australia. Entitled “PRODIGAL SONGS”, Freddie’s latest album is a collection of songs about the power of love, the power of music, an observation on the history of Ireland over the last 100 years… and one song about a certain dog, and with a healthy inclusion of some rare covers.
Freddie moved to Sydney, Australia in March 2011 but toured Ireland and the UK regularly.
He now resides in New York City since December 2016 and returns to play his annual Irish tour where new songs will feature along with Freddie’s classics from his 40-year career as a principal in the orchestra of Irish folk and rock music.