A Rocky Mountain Based Bluegrass Band that began it’s musical Journey in 1987. Since then their travels have taken them all across the US and to Canada and Ireland.

It all happened in 1987 when Doug Elrick and Kenny Pabst, 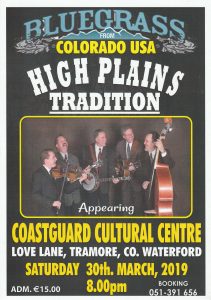 after a year off from playing with the band Grain Of Salt, decided it was time to get back to playing the music we loved in front of the best fans in the world, Bluegrass Music Fans. Through several band member changes, this current band can be seen performing throughout the west from California to just about every state to the Mississippi River. They have also performed in Canada and had 2 tours in Ireland as well. Their music is rooted in the “Traditional Sound” with their own seasoning. Fans have been quoted as saying,” High Plains Tradition is the Most Entertaining Band they have seen in years. You just never know what is going to happen on stage with those Boys.” Doug Elrick is one of the finest songwriters this side of the Mississippi and their shows are full of the songs of the Masters as well as their own material. The Highlight of a Festival with High Plains Tradition is their very moving Gospel Show. They currently have 4 recordings, Prairie Wind, Where the Woods are Cool and Still, Children Go, and Milestones. If you get a chance to see them “LIVE” do. Until then enjoy their recorded music and we look forward to seeing you in the future.

One of the finest songwriters and mandolin players this side of The Mississippi so their shows consist of many originals as well as songs of the “Masters. Doug also is a top luthier.  He has made several mandolins including the one he plays, 2 guitars and 2 fiddles.

The driving force behind HPT’s sound with his hard-driving guitar work and can hit the vocal harmony’s that are the mainstay of the band. He is believed to be an accomplished fisherman as well when not picking with the boys.

One of the finest banjo players in the whole west.  His leads are spot on and his backup is so tasteful. When not playing Bluegrass, Mark is an avid hiker,  bicyclist and hunter.

Bobbie can sing tenor to a dog whistle.  His powerful, cutting edge voice brought a whole new dimension to High Plains as well as his stellar fiddle work. Bobbie lives on the Gulf Coast of Texas and when he’s not picking and singing he is usually with his family doing something in the Gulf, either fishing boating or swimming.

The heartbeat of the band with his rock solid bass. His work on the bass is what keeps the train on track. Kenny has a dream of taking his 1957 Greyhound Bus, (converted to a motorcoach) and just hitting the blue highways and seeing the real America.