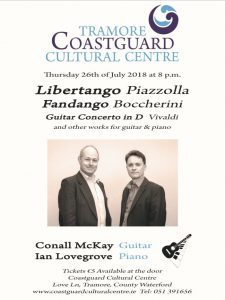 Ian Lovegrove was born in North Devon and grew up in Ilfracombe where he began learning the piano at the age of six and the organ when aged thirteen. He graduated from Bath College of Higher Education with a B.A. degree in music during which time he studied organ with Peter King at Bath Abbey. After a period as a demonstration recitalist for a computer organ company in Weston-Super-Mare he spent sixteen years based in Minehead, Somerset as organist, choirmaster and ‘Parish Musician’. Ian also taught piano and keyboard to many pupils in a number of schools and privately. In June 2007 Ian moved to Aberdeen to take up a post as Piano Instructor for Aberdeen City Council, a role in which he continues. He regularly performs with the Deesisde Choristers and has performed as piano soloist and duettist as well as an organist in Aberdeen, Lincolnshire, Devon and Somerset. Along with Conall McKay he has studied and performed a number of concertos for guitar with piano or organ.

Conall McKay began his guitar studies at the age of eight years in Buenos Aires, Argentina. He continued his musical education in Scotland then the Republic of Ireland where he studied guitar with John Feeley at the College of Music in Dublin. In 1988 he graduated from Waterford Institute of Technology with an honours B.A. degree in music and the licentiate and fellowship diplomas of Trinity College, London. He has participated in masterclasses with David Russell, Alan Neave, Alice Artz among others. In 1993 he was the first winner of the Lowden Bach Cup at the Feis Ceoil. He then performed in many venues in Scotland and Ireland including the Bank of Ireland Arts Centre, John McCann hall, National Concert Hall (John Field Room) Dublin as soloist and member of a guitar duo with Michael
O’Toole and the Tirando Guitar Quartet . Since 1997 he has worked as guitar instructor for Aberdeen City Council and was the musical director of the North East of Scotland Classical Guitar Society 2005 – 2016.
He is now focussing his creative efforts on composing and performing once again.