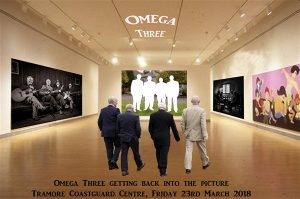 Omega Three’s set-list has been described as ‘country blues meets folk meets jazz’. The Munster Express’s Liam Murphy said ‘This is a band with musical heft’. Liam went on to describe an Omega Three gig as ‘Easy listening to a quartet of seasoned musicians fronted by Francie White, who has an amazing country blues voice, with the sort of ‘chops’ that reminded me fondly of George Melly.

Ace of bassists Michael Dower sat like a Grand Senor and mellowed with panache on acoustic bass guitar, while Gerry Madden on mandolin showed how musically tight this band is. Gerry Power on guitar and vocals kept the happy mood going.

For this Coastguard Centre gig, Francie, Mickey and the pair of Gerrys will kick off at 8pm with doors @ 7.30pm. Adm. €10. BYOB. Book in advance at venue,