Hailing from Canada, Don is not only a guitar wizard, but a singer-songwriter, story-teller and all round entertainer.

Don Alder
Friday 15th Sept. @ 8pm   Tickets €10
Don Alder is a highly entertaining acoustic guitarist with a skill set that has won all the top modern guitar contests in the world and the only guitarist to do so. His performances contain a “WOW” factor that has led to comments such as: 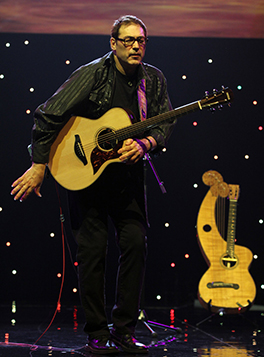 Alder’s performances are transcendental – George Lynch (Dokken)
Alder is a guitarist that should be famous around the world – Ray Daniels (Mgr., Rush)
Alder totally owns an audience and that’s what a Guitar Star does – Michael Molenda (Chief in Editor, Guitar Player Magazine)
Don Alder !! simply amazing – Elliot Easton (The Cars)DON ALDER plays acoustic fingerstyle guitar with a passion that has quickly earned him a reputation as Vancouver’s “best kept little secret”. Don is a world-class fingerstyle guitarist with a “wow factor” that has led to winning all the top Modern Guitar Competitions in the world, multiple endorsement deals with major manufacturers.He is a top endorsee for Yamaha Guitars.
We use cookies on our website to give you the most relevant experience by remembering your preferences and repeat visits. By clicking “Accept”, you consent to the use of ALL the cookies.
Cookie settingsACCEPT
Manage consent